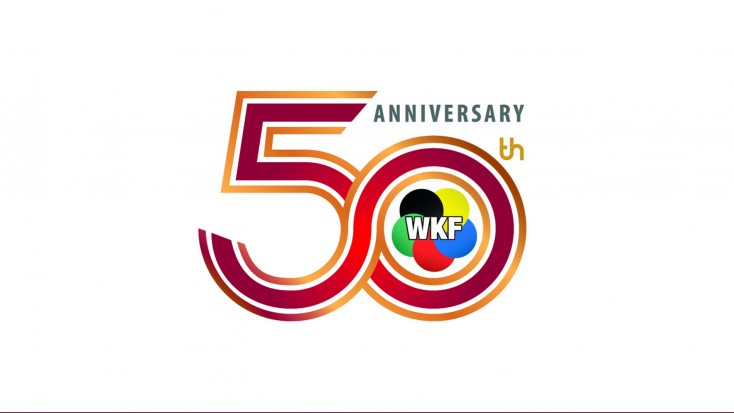 The World Karate Federation is celebrating its 50th anniversary. Karate’s international governing body was created 50 years ago, and to mark the major milestone, the WKF is launching a commemorative logo as well as several digital initiatives.

Millions of Karate fans around the world are called to celebrate the landmark moment. The WKF was initiated on October 10, 1970, at the first General Assembly which was held in Tokyo (Japan) ahead of the inaugural Karate World Championships.

Now, 50 years later, Karate’s international governing body has become a universal, unified, and modern organisation, with over 100 million practitioners around the world, 200 national federation members, and ready to make its Olympic debut in the Olympic Games Tokyo 2020.

The anniversary celebration is marked by the unveiling of a commemorative logo. The WKF is introducing the new “50th Anniversary logo” to mark the occasion of five decades of continuous success.  The new emblem will shape the branding of the organisation in the coming months.

In addition to the commemorative logo, and a message from WKF President Antonio Espinós to be published on October 10th, the WKF has prepared several digital initiatives to be announced shortly.

“Unfortunately, due to the current situation, we are unable to celebrate our 50th anniversary as such memorable moment deserves and as we had planned before the pandemic. We intended to commemorate the historic occasion this year at Nippon Budokan since our first World Championships in 1970 and the Olympic debut of our sport share the same venue. The postponement of the Olympic Games to 2021 and the consequences of the coronavirus pandemic have altered our plans to honour the brilliant 50 years of our history,” said WKF President Antonio Espinós.

“The 50th anniversary is an opportunity to thank all those who, with their effort and hard work, have contributed to our achievements, all those who are no more with us, and all those who continue with us contributing to the progress and development of our sport,” added the head of Karate’s international governing body.