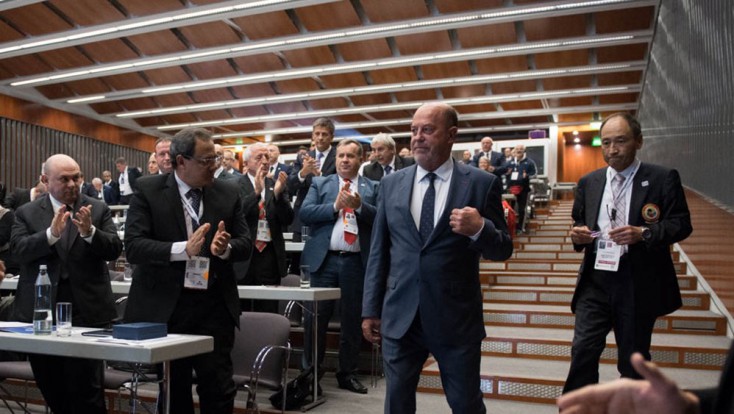 Mr. Antonio Espinós was re-elected as President of the World Karate Federation at the 2016 WKF Congress in Linz (Austria) where he vowed to continue taking Karate to “historic and memorable times”.

Mr. Espinós, who was first elected in 1998, stood unopposed for re-election to the WKF presidency for the period 2016 – 2022 after receiving unanimous support for his candidacy from all segments of the sport.

79 delegates out of a total of 82 representatives with voting rights approved by secret vote the re-election of Mr. Espinós by vast majority at the Congress being held in the Austrian city in the day ahead of the start of the anticipated 2016 Karate World Championships.

Mr. Espinós said: “It is an hounour for me to have received such a full support to keep on contributing to take Karate to even greater heights. Our ancient discipline is undoubtedly experiencing unforgettable moments; we are ready to see our life-long dream of Karate into the Olympics coming true, and our core values of tradition, universality and progress are stronger than ever. We will work together so Karate can continue inspiring millions all around the world”.

Under his pioneering leadership, Karate has not only achieved unprecedented worldwide growth, but the sport also accomplished the historic milestone of being included in the programme of the Tokyo 2020 Olympic Games.

The new era of Karate as Olympic sport and the unique landscape ahead were highlighted by Mr. Espinós as main commitments for the next term, while he pledge to increase the already impressive universal appeal of the discipline as well as to further extend Karate’s values.

“We are living historic moments in Karate. This is the first Congress after our inclusion in the Tokyo 2020 Olympic Games and I would like to thank all of you who worked hard and contributed to this success,” commented Mr. Espinós in his address to the plenary session. The WKF President expressed his gratitude to the members of the Executive Committee for their support, and shared the joy of Karate’s historic days with the whole family of the ancient discipline.

“This success is your success. As long as you continue working hard and being loyal to the values that the WKF represents, we can continue this wonderful journey,” stated Mr. Espinós.

Following the proposal by the Executive Committee, the WKF Congress approved by acclamation the designation of Japan Karate President Takashi Sasagawa as WKF Honorary President. The preparation of the participation of Karate as Olympic sport in Tokyo 2020, the fully acceptance of five new National Federations members, the approval of the accounts, the celebration of a global event called “World Karate Day” in 2017 and the outline of the upcoming World Championships were among of the many issues discussed at the Congress.