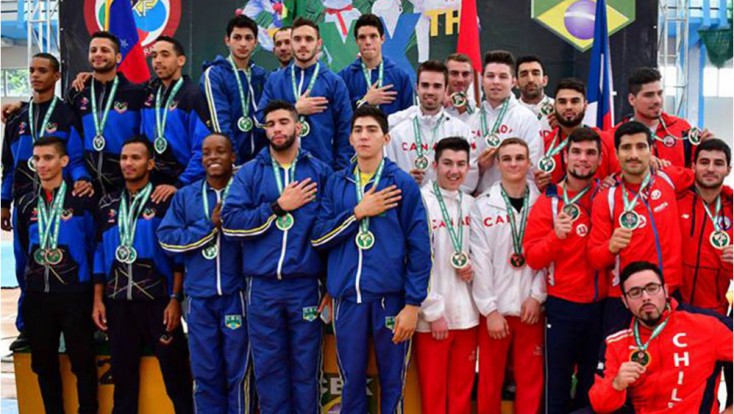 Karatekas of the host country prevailed in the last day of the 2016 Karate Pan American Championships to take Brazil to the top of the final podium of the tournament held in Rio de Janeiro.

Much to the delight of local fans, Brazil wrapped-up the event with a tally of 13 medals. The domination of Brazilian Karatekas was so overwhelming that the delegation of the host country clinched six gold, two silver and five bronze medals. Mexico earned the second position of the final ranking with two gold, two silver and four bronze medals, followed by Dominican Republic with a total of six medals.

The excitement was high on the last day of the 2016 Karate Pan American Championships as team categories took the stage. The authority of Brazilian Karate athletes throughout the competition was confirmed once again as local heroes won in three of the four team competitions.

Following his gold medal in Male Kumite -60kg, Karate Star Douglas Brose led Brazil to rule in Male Team Kumite category. Local squad had gold medallists Brose and Hernani Verissimo, silver medallists Alberto Azevedo and Wellington Barbosa and bronze medallist Breno Texeira in the line-up to put Brazil on the road to victory. Brazil beat Venezuela in the final and paved the way for the successful day for hosts.

The Female Team Kata and Female Team Kumite competitions also finished with the Brazilian flag on top. In the category of the choreographed patterns of movements, the squad of the Dominican Republic reached the final with the intention of using their good performance in the individual Kata event, in which two Dominican Karatekas – Maria Dimitrova and Franchel Velazquez – took the second and third positions of the podium. However, Brazilian representatives ended with the gold medal in their hands as local squad beat the Dominican trio in the final (4-1).

In a disputed title-deciding encounter, Brazil claimed the first position in the Female Team Kumite category, after overcoming Venezuela in a nerve-racking final (2-0). Despite earning only two medals in Individual Kumite competitions – Bianca Mafra’s bronze in Female Kumite -68kg and Beatriz Mafra’s gold in Female Kumite -50kg, the squad led by Valeria Kumizaki rounded up the golden day for Brazil.

Representatives of Peru also climbed to the top of the podium in the final day of competition following their victory in Male Team Kata. In a split 3-2 decision, Peruvian Karatekas clinched the first gold for their delegation.

The 30th edition of the Karate Pan American Championships finished in the iconic city of Rio de Janeiro where top athletes have showcased their abilities in three thrilling days of the best Karate.