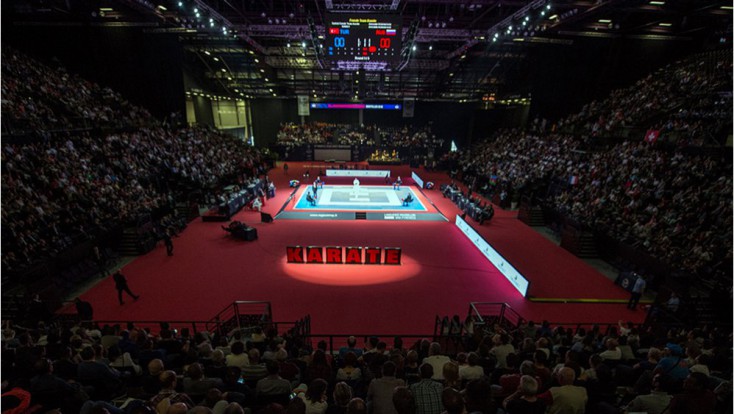 While the world of Karate is fast approaching the most crucial times of its history, two of the flagship events of the sport celebrated in May have helped this ancient discipline to showcase the global magnitude of Karate.

The 2016 Karate European Championships and the 2016 Karate Pan American Championships took the sport by storm in May as the best athletes of both continents gathered in two thrilling and widely followed competitions. Hundreds of competitors and thousands of fans all over the world took the opportunity to demonstrate Karate’s popularity and universality.

Over 400 athletes from 46 countries met in Montpellier (France) for the 50th edition of the Karate European Championships. France claimed the top of the final standings of the event with a tally of 11 medals, and 21 countries were represented in the medal table of the competition. Nearly half of the delegations travelled home with an award, a sign of the expansion of high-level Karate in Europe.

The competition celebrated in the southern French city from May 5-8 featured electric moments to remain in the memory of fans, such as local idol Alexandra Recchia’s narrow victory over Karate Star Serap Ozcelik, the three out of four gold medals for Spain in Kata competitions, or the sensational triumph of Azerbaijan over Croatia in Female Team Kumite, among many others.

“It is great to have the opportunity to compete in front of family and friends in a sport hall like this. It gives you extra motivation to know that you have so many people coming to support you,” declared French heroine Alexandra Recchia after making it to the heart-wrenching title-deciding clash.

“The level of this championship has been outstanding; the sport hall is impressive, with great number of spectators, who are always supporting all the athletes. I think tournaments like this give a real dimension of our sport,” commented European Champion Sara Cardin from Italy.

Thousands of fans witnessed live the best kata and kumites, as sport enthusiasts filled up the seats of the magnificent Montpellier Arena sport hall. With an average of 4,000 spectators attending the competition during the four days of the tournament, up to 6,000 fans took the stands to show their passion for Karate in the session of finals on Saturday.

Outside France a worldwide viewing audience also had the opportunity to see some of the best Karatekas in action. The tournament was televised in 35 nations all over the world, and the event was streamed live on WKF YouTube channel. Nearly 100,000 people followed the live stream of the finals on WKF video channel, with more than one million minutes of watched time.

The show of live music, entertainment with DJs and dancers and the spectacular play of lights and sounds contributed to make the 50th edition of the European continental championships a memorable event.

“The European Championships in Montpellier represent the perfect example of the true notion of our sport: Great level of competition, flawless organisation in splendid setting, and devoted and animated spectators; all these elements contribute to confirm that our hard work is taking Karate to new levels of excellence,” declared EKF and WKF President Antonio Espinós.

The quest to crown the best Pan American Karatekas was held in Rio de Janeiro (Brazil) from May 26-28th. The iconic Brazilian city was the perfect stage to host the 30th edition of the Karate Pan American Championships, since fans in Rio de Janeiro had the opportunity to enjoy a first-class international sport event only two months before welcoming the Olympic Games.

Among the many highlights of the event, local star Douglas Brose was proclaimed one of the heroes of Pan American Karate after earning two gold medals in the tournament, while Venezuela’s Antonio Diaz clinched his ninth consecutive continental title in an outstanding demonstration of efficiency and domination. Brazilian youngsters Hernani Verissimo and Beatriz Mafra confirmed the potential of Karate in Brazil and the impulse of new generations following their victories over favourites in their categories. Meanwhile, USA’s Kokumai Sakura confirmed her status as a leading lady of Karate in the continent after presenting perfect performances in her Katas to earn her fourth gold medal in the competition.

“I feel an infinite joy for having lived this experience and for being part of this team. I want to congratulate all those who made this (success) possible. It is a reminder that one should always fight for your dreams,” said Brazilian superstar Douglas Brose in his official Facebook page regarding the domination of host country in the competition, as Brazil topped the final standings of the tournament with 13 medals.

“The successful organisation of our continental championships indicates the expansion that Karate is experiencing worldwide. Not only our discipline enjoys tremendous popularity around the world for our values and our ideals, but also Karate is widely regarded as a spectacular, modern and highly entertaining sport because of events like these continental championships”, said WKF President Antonio Espinós.

In typical Brazilian celebratory way the 30th edition of the continental championships ended in the city where the future of Karate will be decided in two months. Rio de Janeiro will host the Session of the International Olympic Committee that will take the final decision on the inclusion of Karate in the Olympic programme of the 2020 Olympic Games in Tokyo. While that moment comes, fans of the sport worldwide will continue enjoying the global impact of the sport in the WKF’s outstanding Karate events.